Apple crisp is a fall must-have, but it can be loaded with sugar! Take a look at this healthy recipe that’s sugar-free but still tastes amazing. For a while, I thought that healthy apple crisp just wouldn’t be as good as the real thing. Until recently.

Pin this image for later! 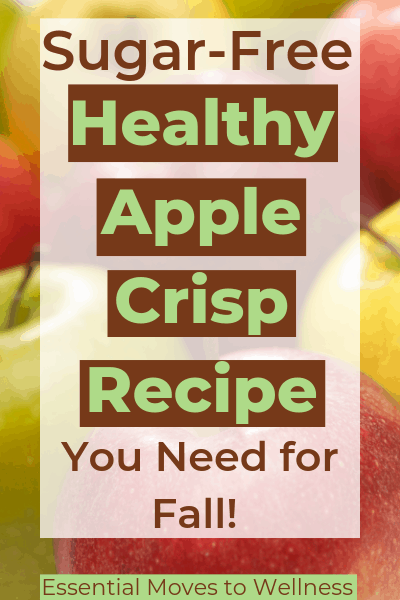 This post contains affiliate links. You can learn more here.

The crunchy sweetness of the apple, the vibrant flavor of the cinnamon, all held together by oats and butter. Regular apple crisp is usually loaded with sugar. I mean, it’s dessert, so it’s to be expected, right? Not always!

The combined sugar in the crust with the natural sugar in the apples can create a pretty big overload! But what if we replaced the added sugar with a natural-occurring sugar? The secret ingredient, ladies and gentlemen, is pure maple syrup!

I scoured the web to find and make my own healthy apple crisp recipe, and one recipe on Bob’s Red Mill suggested maple syrup. Best idea ever! Pure maple syrup is a sweetener made completely by nature, which makes it easier for the body to take in and use properly.

There are other natural sweeteners, such as honey and agave, but maple syrup has the right kind of fall sweetness we’re going for. And make sure that you get pure maple syrup! The regular, cheap kind is usually full of extra sugar that you’re trying to avoid.

Things you may need for this recipe:

As for the rest of the ingredients, there are always healthier substitutions! Like whole wheat flour instead of regular flour (you can substitute with almond flour if you’re gluten-free), and coconut oil instead of butter. The walnuts add in extra crunch, and cinnamon is a winner all around! I even have a post all about the benefits of cinnamon!

For the apples, you will need:

For the crust, you will need:

What the Crowd Says About this Apple Crisp…

I served this apple crisp to my whole family, and they loved it! I agreed too, this was some of the tastiest apple crisp I’ve had in a while. It’s sweet, but not overly sweet. My dad even commented that he knew he could eat this without worrying about a sugar rush.

Coming from a family that is super health conscious in terms of food, this was a major hit! Absolutely everyone could eat this, despite their food intolerances or sugar restrictions. I had mine with a dollop of whipped cream and it was divine!

I later baked this for a potluck at work, and it was just as much of a hit! Some people said that they could taste the coconut oil once I mentioned it was in there, but they weren’t mad about it. Some of them found the taste refreshing! Now I get asked to make this every time we have a fall potluck!

If you’re looking for a nice, healthy fall dessert, try this apple crisp! I’m so glad I managed to make one of my favorite fall desserts guilt-free and delicious. That’s what I love most about a natural lifestyle. You can take the things you love the most and fit them to your own preferences!

As a child, I would die for my mom to make this every fall. And you bet I plan on keeping up this tradition! Now I can make it as much as I want, without getting a few mouth sores from all the sugar (does anyone else get mouth sores from too much sugar?).

I can’t wait to go apple-picking and really make everything from scratch! It really helps to get me in the fall spirit, and it’s a great way to get outside and enjoy yourself. Don’t just make this apple crisp just to make it. You can turn it into a whole experience!

Would you try this apple crisp? Let me know in the comments below!