Did you know that the vast majority cinnamon you see at the supermarket is considered fake cinnamon? For a while now, there’s been a debate between Ceylon and Cassia cinnamon. Ceylon cinnamon is considered to be the holy grail “real” cinnamon, while Cassia cinnamon has had its name dragged through the mud as “fake.”

With what’s considered fake cinnamon skyrocketing this time of year, I thought it would be good to set the record straight. That way you don’t have to break your wallet over a spice that you think might be better.

Pin this image for later!

This post contains affiliate links. You can learn more here.

Where Does Cinnamon Come From?

People are often surprised to learn that cinnamon is not simply a ground-up herb. Cinnamon is actually a ground-up bark from the Cinnamomum tree, a genus of trees found in jungles across the world. (source) The bark is stripped from the trees, dried out, and then ground into a fine powder.

What people consider fake cinnamon, or Cassia cinnamon, makes up the vast majority of the cinnamon that we consume. This is simply because there are more Cinnamomum trees than there are other types of cinnamon trees. 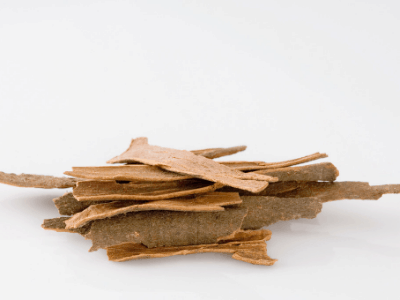 True cinnamon, or Ceylon cinnamon, only comes from the Cinnamomum Verum tree. These unique trees are only found in Sri Lanka (formerly known as Ceylon). Ceylon cinnamon is lighter in color, slightly sweeter, and way more expensive. (source)

Seriously. Try to look for a jar that specifically says Ceylon cinnamon, and your wallet will scream “Nope!” This is totally worth it for some people, though. I’ve had friends who get Ceylon cinnamon straight from Sri Lanka claim that they can’t eat regular cinnamon anymore!

So you’re actually eating ground-up tree bark when you eat cinnamon. This can cause complications with the preservation process, causing “fake cinnamon” to be more prevalent than other versions of fake herbs and spices. We’ll get into why that is in just a minute.

Here’s the kicker: There is no major danger or difference between the two kinds of cinnamon! (source) Other than the taste, of course. Like I said earlier, Ceylon cinnamon is the kind of “pure, bougie” cinnamon that has a richer color and taste.  The only kind of noteworthy difference is that cassia cinnamon has a high amount of coumarin.

What is this strange word I just used? Coumarin is a chemical that is naturally produced in some plants, and it can also be synthetically produced to help with blood clots. In other words, it’s a blood-thinning agent.

If you ingest large amounts of coumarin over an extended period of time, it may cause or worsen liver damage. This has been found in people that are particularly sensitive to coumarin. It differs from person to person. As always, consult with your doctor if you think you may be sensitive to coumarin.

But the thing is, you would need to eat heaps of cinnamon before you even have to worry about this! I’m talking like 5 rounds of the cinnamon challenge per day. Most people can eat cinnamon on a daily basis and be totally fine.

Remember how the cinnamon challenge went on YouTube a few years back? Yeah, I don’t think you need to worry about eating too much cinnamon. Other than a slightly different chemical makeup resulting in more coumarin, there’s no major difference between Ceylon and Cassia cinnamon. And there are so many benefits to daily cinnamon consumption!

One of the main components of cinnamon is cinnamaldehyde (say that 10 times fast!), and it contains much of cinnamon’s benefits. (source) One of these benefits is a high amount of antioxidants. Cinnamon has some of the highest amounts of antioxidants compared to a few superfoods.

In fact, cinnamon can be used as a natural preservative. This gives me more of an excuse to make cinnamon bread regularly! It does an amazing job at keeping those decomposing molds at bay. It even helps fight bacterial and fungal infections.

Another amazing benefit of eating cinnamon is its anti-diabetic properties. Cinnamon helps to lower blood sugar levels, keeping everything balanced. It naturally decreases the amount of glucose entering the bloodstream, and even helps lower insulin resistance.

Cinnamon is also great at reducing risks for heart disease. This is one of the leading causes of death among Americans, and anything and everything should be done to stop it. Regular cinnamon consumption helps keep the “bad” cholesterol down, and the “good” cholesterol up.

This wonderful spice can be used for more than just eating! I’ve used cinnamon in face masks over the years with great results. Like I said earlier, Cinnamon is antibacterial, and helps get rid of all the germs lingering on your face just waiting to cause a breakout.

I will say, though, that you don’t want to leave cinnamon on your skin for too long. My mom and I tried a

homemade mask with cinnamon and honey for the first time several years ago, and both of our faces turned bright red after 10 minutes!

After a bit of Googling, we learned that it was just the blood rushing to our skin, and it would disappear in a few minutes. Sure enough, we were left with bright, glowing skin afterward!

How to Get the Best Cinnamon Possible

One thing that’s worth mentioning is that you may be able to get “true” Ceylon cinnamon, but that still doesn’t mean it’s not fake cinnamon. Unfortunately, cinnamon is one of those mystery foods that you just can’t be sure of what its contents actually are.

Cinnamon is obviously part of a plant, and plants are (usually) best when they are freshly harvested, right? Well, the cinnamon in the little shakers at the store could have been harvested months ago! Meaning that it’s going to be stale and lacking its essential oils for an amazing taste.

And that’s not all! In order to preserve cinnamon, most manufacturers will add things like flour to keep their cinnamon looking fresh. (source) In other words, your cinnamon is most likely stale wood ground into a powder with some colored flour for looks.

How do you solve this problem? Find a cinnamon company that provides fresh sticks with the harvest dates listed. And the cool part? You can actually grind cinnamon yourself! You just need a cinnamon grater like the one below:

I personally haven’t tried this method, but I’ve read that you can instantly taste the difference! If you are a cinnamon lover, I highly recommend giving this a whirl. Or it could be a great Christmas gift for someone you know?

So, Is Fake Cinnamon Actually Dangerous?

The answer is “No!” There is no cause for debate between Ceylon and Cassia cinnamon! The only difference between the two is the higher price and sweeter taste of Ceylon cinnamon, and lower coumarin. But, most cinnamon that you can find at your store is probably not a great option anyways. Considering that there are additives for preservation of already stale ground cinnamon.

Everyone should eat at least a small amount of cinnamon every day to  reap up the health benefits! This includes lowering insulin resistance, balancing blood sugar, and reducing the risk of heart disease. You can even use cinnamon as a face or scalp mask for fast hair growth.

If you want the best cinnamon possible, I highly recommend you find a cinnamon company that is honest with their customers and has the harvest date written on their jars. You can even grind cinnamon yourself! Lucky for you, there are plenty of options on Amazon to try!

Whether or not you actually want to go to the trouble of grinding your own cinnamon is up to you. I don’t use it that much, so I’m content to be an informed shopper for right now. But if you live for cinnamon, it’s worth a try!

Where do you stand on the whole Ceylon vs Cassia cinnamon debate? Let me know in the comments below!